Kurt Vonnegut Sums Up the Situation of Humans and Other Life on Earth. Use the Main Menu (below-right) for desired topics → ...

Ingenious or Misleading Rationalization for the "Pause" in Global Warming?

"A glass of ice water in a hot place is certainly warming," said the confident questioner, "despite the thermometer 'pausing' at freeing until most of the ice has melted. Don't look at the thermometer to detect the warming, watch the ice cubes melt!"

"Seriously," he continued, "we should watch the alarming melting of glaciers and polar sea ice rather than the 'Pause' in Global Warming according to thermometer readings."

When I give talks about climate science to intelligent audiences, my general theme is that Global Warming is REAL, and partly due to human activities, but it is NOT a big DEAL.,
Rationalizations for what happened to the excess heat due to human-made CO2:
How can the world's leading climate theorists and modelers still be considered competent if they did not know about the heat capacity of the oceans? (Or, apparently, even the Ice Water Experiment! :^)

The Abstract for the recently published study by Michael "Nature Trick - Hockey Stick" Mann, et. al admits the reality of the "Pause" "temporary slowdown". Guess what he blames it on?:


The temporary slowdown in large-scale surface warming during the early 2000s has been attributed to both external and internal sources of climate variability. Using semiempirical estimates of the internal low-frequency variability component in Northern Hemisphere, Atlantic, and Pacific surface temperatures in concert with statistical hindcast experiments, we investigate whether the slowdown and its recent recovery were predictable. We conclude that the internal variability of the North Pacific, which played a critical role in the slowdown, does not appear to have been predictable using statistical forecast methods... [emphasis mine]

In other words, the unpredictable "internal variability of the North Pacific" ate my alarmist projection! (A variation on the old "dog ate my homework" excuse :^)

Why was it not predictable?
I find it amazing that so many of my friends (who are otherwise intelligent people) cling to their firm belief in a coming human-caused climate catastrophe. Their confidence is based on the alarming predictions rooted in IPCC climate theory and computer models.

Yet, like the confident questioner I mentioned in the first paragraph, they seem to acknowledge that the IPCC theorists did not know about the relatively simple concepts of ocean heat capacity, or even the temperature profile of ice water due to the Heat of Fusion!

If these  models could not correctly predict a near-term event, such as the "Pause", why put any credence in their catastrophic predictions for 50 or 100 years hence? 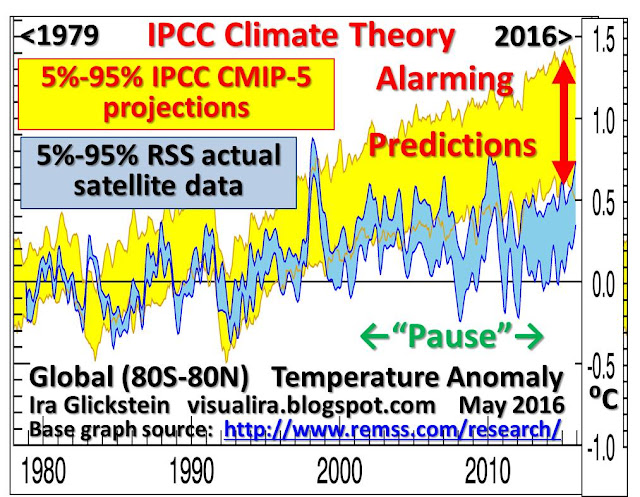 How Does the Ice Water Experiment Relate to Earth's Proportion of Ice to Liquid Water?

To satisfy my own curiosity, I decided to do some research and figure out how much the melting of glaciers, sea ice, and ice sheets might have reduced Global Warming since 1979. This period includes the statistical "Pause" (or "temporary slowdown in large-scale surface warming during the early 2000s" as Mann refers to it).

The Ice Water Temperature Pause Experiment works for two reasons:
So, what is the percentage of ice to liquid water on Earth, and has enough of it melted to account for the failure of the IPCC models since 1979, or during the "Pause"?

According to Debenedetti, Pablo G. & H. Eugene Stanley. "Supercooled and Glassy Water."Physics Today. Vol. 56, No. 6 (June 2003): 40 (quoted by http://hypertextbook.com/facts/2000/HannaBerenblit.shtml) here is what we need to know about the Earth's Ice and Water:

If both the Arctic/Greenland and Antarctic Ice were to melt, that would account for a reduction in warming of about 33 x 80 / 1300 = 2⁰C (3.6⁰F). Wow! That seems substantial, and there certainly would be catastrophic flooding in some low-lying places if all the Earth's ice melted.

However, actual ice melt rates are much, much, much less, according to https://nsidc.org/cryosphere/sotc/ice_sheets.html

So, total Earth ice melt accounts for less 0.09% of the warming missing from the IPCC's alarming projection. Not so impressive, is it?

So, if anyone hits you with the Ice Cube Temperature Pause Experiment, congratulate them on being 0.09% right (and thus 99.91% wrong :^)

Posted by Ira Glickstein at 8:11 PM

My BLOGS and Other Resources